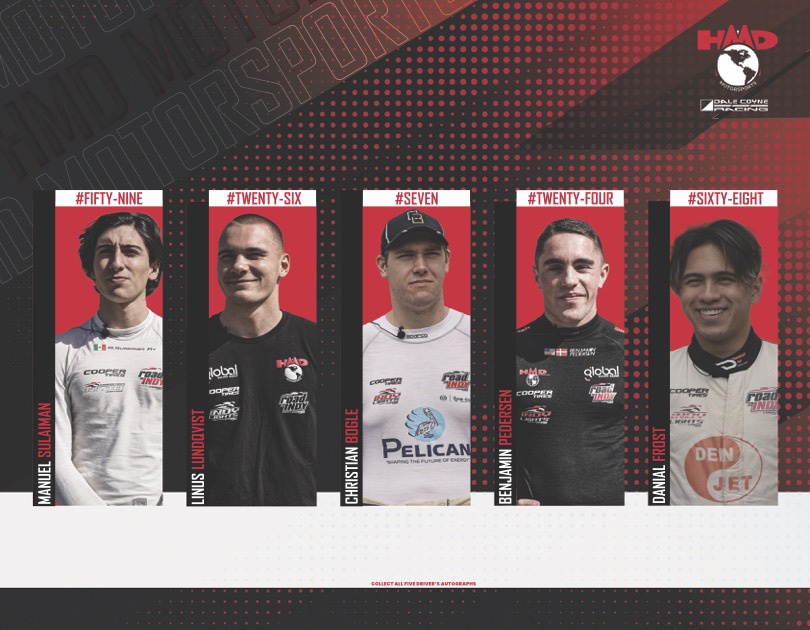 Since claiming the 2021 Indy Lights Presented by Cooper Tires Championship, HMD Motorsports with Dale Coyne Racing (HMD w/ DCR) has been hard at work planning and preparing for the upcoming season. After months of testing, finalizing driver lineups and expanding partnerships, the team is now ready to take on the opening round of the 2022 season this weekend on the Streets of St. Petersburg, Florida.

With an expanded presence throughout the Indy Lights and NTT INDYCAR SERIES paddock, HMD w/ DCR is fielding five drivers this season. Returning to the team are Linus Lundqvist, Manuel Sulaiman and Benjamin Pedersen as that trio will be joined by new team members Christian Bogle and Danial Frost.

As the top-finishing returning driver, Linus Lundqvist is hoping to be a title contender from the start and with a year of Indy Lights under his belt, he is ready for the challenge. Last season, Lundqvist picked up three wins and eleven podiums to finish third in the championship.

Benjamin Pedersen is returning to the team in the Global Racing Group with HMD Motorsports entry. In the second half of the 2021 season, Pedersen claimed five podium finishes to finish fourth in the championship but is still searching for his first Indy Lights win. After topping the charts throughout the offseason testing program, Pedersen is looking strong to carry his momentum into the 2022 season.

Manuel Sulaiman, who joined both HMD Motorsports and the Indy Lights Championship for the final six rounds of last season, is returning to the team for his first full season in Indy Lights. After finishing sixth in his first ever Indy Lights race, Sulaiman is now settled in with the team and is ready to fight his way through the field.

New to the HMD Motorsports with Dale Coyne Racing lineup is Christian Bogle, returning for his second year of Indy Lights. Bogle entered the Road to Indy three seasons ago and only began his racing career in 2018. Since then, Bogle has moved up the ranks into Indy Lights and has spent the offseason familiarizing himself with the HMD Motorsports team and car and is now feeling confident heading into 2022.

Danial Frost completes the five-car lineup for HMD w/ DCR. Also returning for his second year in Indy Lights, Frost claimed four podiums and three pole positions in 2021. He has now made the switch over to HMD for his sophomore season and is eager to claim his first win in the championship as he looks to fight for the Drivers’ Championship in 2022.

On top of the five Indy Lights Presented by Cooper Tires entries, HMD Motorsports moved up into the NTT INDYCAR SERIES with rookie driver David Malukas in the #18 Dale Coyne Racing with HMD Motorsports entry.