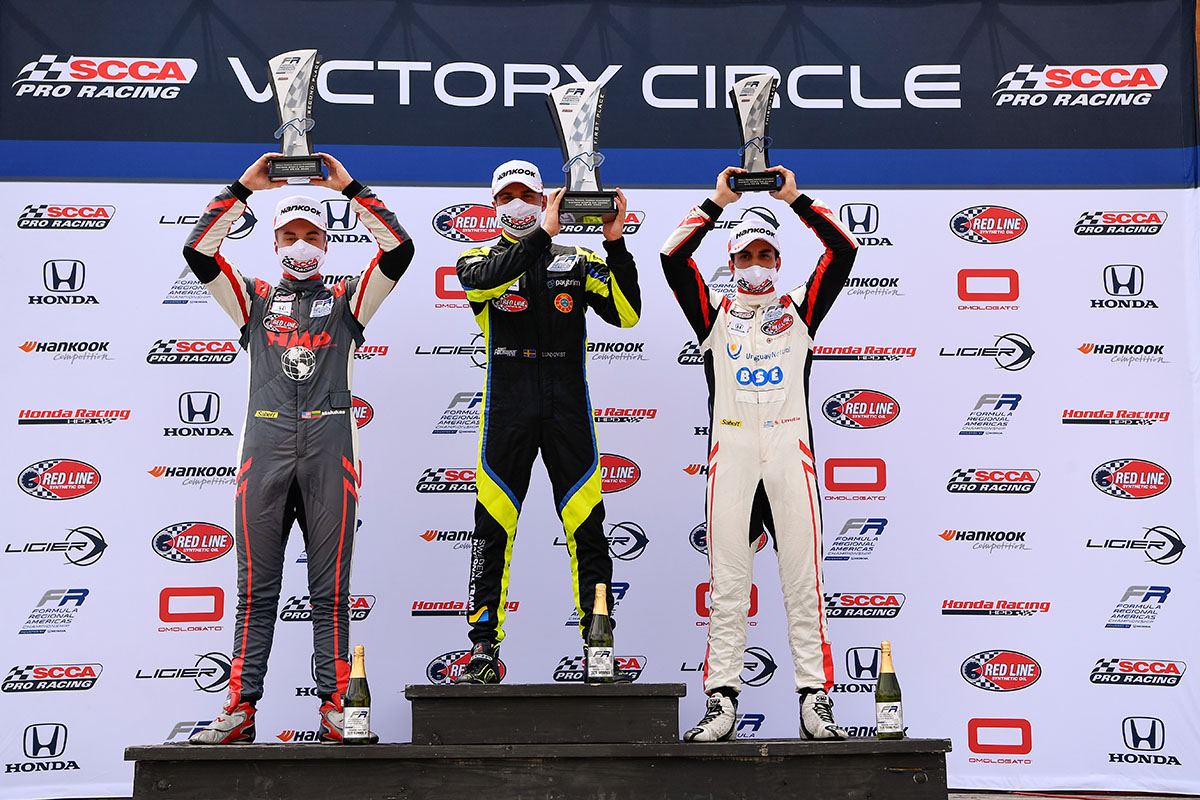 HMD Motorsports showed their strength this weekend in the Formula Regional Americas Championship Powered by Honda and left Mid-Ohio Sports Car Course with three podium finishes between the two drivers. David Malukas finished on the second step of the podium in both races of the weekend and Santiago Urrutia finished on the third step in race number two. With minimal prep time and testing, HMD Motorsports gave it everything they had and came out successful.

After making the switch from Indy Lights only a few short weeks ago and with only a day of testing under their belt before arriving at Mid-Ohio Sports Car Course, HMD Motorsports instantly found their footing within the Formula Regional Americas Championship Powered by Honda. In the season-opening practice session, David Malukas quickly found his pace and positioned himself at the top of the leaderboard, proving that both Malukas and the team are a competitive force. Uruguayan driver, Santiago Urrutia, suffered front wing damage early on in the session, but was still able to place himself well inside the top-ten, finishing the session in sixth.

On Friday, the team prepared for the final practice session and qualifying for the first race of the weekend. Santiago Urrutia was ultimately forced to sit out of the final practice due to a tire placement issue. David Malukas found his stride early on in the session and was putting down some of the fastest laps. After making a change during his only pit stop, Malukas ended the practice session in fifth. In the only qualifying round of the weekend, Urrutia went out with very little practice and was able to situate himself in fifth. Malukas quickly made a name for himself in the series and displayed his speed but ultimately missed the pole position by 0.001 seconds, a record for the closest qualifying finish for the series, behind first place qualifier Linus Lundqvist.

After numerous cancellations and schedule changes, and ultimately changing series from Indy Lights to FR Americas, HMD Motorsports saw their first green flag for a race in over eight months. Urrutia, who qualified fifth, had an excellent start and made quick work to place himself in second. He was able to maintain his position for the entirety of the race. With only two laps remaining, Urrutia spun out and ultimately dropped back to 15th. Malukas, after qualifying second, dropped the clutch a bit too quick on the start and dropped back to fifth. He then worked his way into the fourth position, and after a yellow flag, with only eight minutes remaining, he slid into third, trailing his teammate, Santi Urrutia. After Urrutia’s spin with two laps remaining, Malukas moved up and claimed the second step of the podium. For the second and final race of the weekend, starting positions were determined by driver’s fastest lap times from race one. Malukas had a fast lap time of 1:20.269 and claimed the second starting position, and Urrutia closely trailed in third with a time of 1:20.279. With only 0.010 seconds separating the two HMD Motorsports drivers, both drivers were ready to battle for podium finishes.

Taking the green flag at 10:05am, Malukas and Urrutia both had strong starts and were able to maintain their starting positions. After a full course yellow, the race went green for the second time with eight minutes remaining. The two HMD drivers held on to second and third and finished out the race with both drivers on the podium.

HMD Motorsports excelled over the weekend and are already working on preparations for the next race at VIRginia International Raceway in three weeks. With a lot more to learn about the chassis and the series, the team is excited to continue to battle for wins and podiums throughout the remainder of the FR Americas season.

HMD Motorsports is eager to extending the opportunity for another driver to join the team at the next race and for the remainder of the season. For more information on joining HMD Motorsports contact us at [email protected]